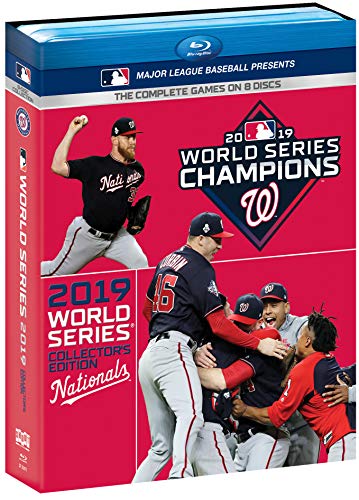 The Washington Nationals 2019 World Series Collector's Edition includes all seven complete games of the World Series against the Houston Astros and a bonus disc featuring the pennant-clinching NLCS Game 4 versus the St. Louis Cardinals in its entirety. Relive every moment of the 2019 Fall Classic starring Stephen Strasburg, Max Scherzer, Patrick Corbin, Howie Kendrick, Juan Soto, Trea Turner, Ryan Zimmerman, Anthony Rendon and more. The Nationals struggled mightily to begin the season, but Manager Dave Martinez was confident that this team would turn things around and make a Postseason run. The National League Wild Card game against the Milwaukee Brewers and the NLDS against the Los Angeles Dodgers both featured the Nationals coming back from deficits in elimination games before a sweep of the St. Louis Cardinals in the NLCS. The Nationals set the tone in World Series Games 1 and 2, winning both on the road in Houston before bringing the Fall Classic back to Washington, D.C., for the first time since 1933. At National's Park the narrative shifted, with the Astros taking Games 3, 4 and 5, putting the Nationals at the brink of elimination in Game 6. They returned to Houston with a convincing win in Game 6, but the Nationals resilience was really on display in a dramatic Game 7, where they took a come-from-behind win to bring the Commissioner's Trophy back to the District.