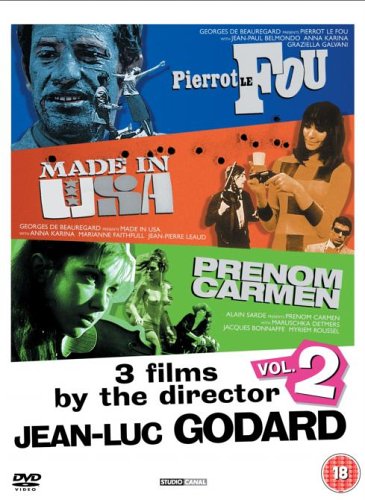 Triple bill of classic Nouvelle Vague ('New Wave') films by acclaimed auteur Jean-Luc Godard. In 'Pierrot Le Fou' (1968), Ferdinand (Jean-Paul Belmondo) leaves his wife and child and runs off with the babysitter Marianne (Anna Karina). The pair head south to find Marianne's brother, with Ferdinand getting caught up in Marianne's crimes along the way as they both spiral toward destruction. Memorable for Raoul Coutard's deep and lush photography, it offers a spontaneous musical sequence under the pine trees, elements of the gangster genre and a tragic account of the transience of love, as well as addressing the nature of the film medium itself. The comic book-influenced crime thriller 'Made in USA' (1966) is Godard's homage to the gangster movies of American directors Nicholas Ray and Samuel Fuller. A journalist, Paula Nelson (Anna Karina) arrives in Atlantic City, France, in search of her missing ex-lover. She soon discovers that he has been murdered by an unknown assassin, and begins to suspect that he was involved in some political intrigue. In her quest to uncover the truth, she meets a sequence of shady characters from gun-toting gangsters to corrupt police officers. Finally, in 'Prénom: Carmen' (1983), Carmen X (Maruschka Detmers) is a member of a gang of thieves who uses her film director uncle's latest production as a cover for a kidnapping. This semi-comic film combines the operatic story of Carmen with a look at the difficulty of film-making. Godard sends himself up in a role as a burnt out film-maker who Carmen attempts to spring from a lunatic asylum.
Tweet