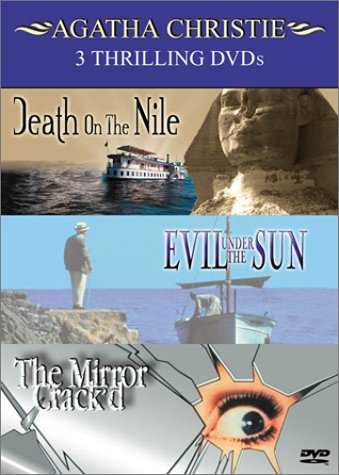 Death on the Nile
Following Albert Finney's quirky and compelling performance as Agatha Christie's Belgian detective, Hercule Poirot, in 1974's Murder on the Orient Express, Peter Ustinov capably took over the role in this 1978 adaptation of Christie's river-bound whodunit. While on a pleasure cruise along the Nile with a taciturn companion (David Niven), Poirot slips into action following the murder of a much-despised heiress (Lois Chiles). There's no shortage of suspects... until, that is, they also start dying off, obfuscating the investigation by suggesting that several killers may be at work. With a disciplined screenplay by Anthony Shaffer, the film is solid enough and is graced immeasurably by a glittery cast including Bette Davis, Maggie Smith, Mia Farrow, Olivia Hussey, Jack Warden, and Angela Lansbury. Directed with customary efficiency by John Guillermin (King Kong, The Towering Inferno). --Tom Keogh

Evil Under the Sun
Mostly for Poirot completists and admirers of then-trendy, all-star ensemble casts from the 1970s and early '80s, Evil Under the Sun finds Peter Ustinov in his second outing as Agatha Christie's famous Belgian detective (three years after 1978's Death on the Nile). As the title promises, the action this time takes place on an Adriatic island (though Christie fans will surely balk at the switch from the novel's setting on the English coast), where a famous stage star (Diana Rigg) is murdered, and the list of likely suspects is unusually high. The parade of legendary performers--Roddy McDowall, James Mason, Sylvia Miles, Maggie Smith, Jane Birkin--plus Ustinov's energetic performance keep things hopping. But Anthony Shaffer's lazy screenplay and director Guy Hamilton's superficial approach nudge everything (action, characters, tone) toward campy, near-parody, with bitchy sniping, tacky costumes, and an obligatory soundtrack of Cole Porter tunes. It's only in the last lap that the film transcends such obviousness and finds its way back to the glories of detective fiction. --Tom Keogh

The Mirror Crack'd
Angela Lansbury does the honors as Agatha Christie's determined sleuth, Miss Marple, in this adaptation of Christie's novel. A washed-up movie star (Elizabeth Taylor) is attempting to make a comeback but is driven to distraction by a mysterious event from her past. Also problematic for Taylor's struggling actress is a series of murders occurring with clockwork regularity in the quiet, 1950s English village where a film is being produced--killings that are all somehow connected to her. Despite the British backdrop, most of the suspects, including Rock Hudson, Kim Novak, and Tony Curtis, are American in this 1980 feature directed by Guy Hamilton (Evil Under the Sun). (At least Miss Marple's nephew, the redoubtable Inspector Craddock, is played by Edward Fox.) The bad news: this is a curiously flat, monotonous film, with a mystery hook that, sad to say, is among Christie's more familiar and predictable. Hamilton doesn't demand much of his largely ornamental cast, and they don't volunteer much to fill the void. Still, fans of Miss Marple and Christie, especially those with a burning hunger to see every film or television program based on the books, will want to check it out. --Tom Keogh