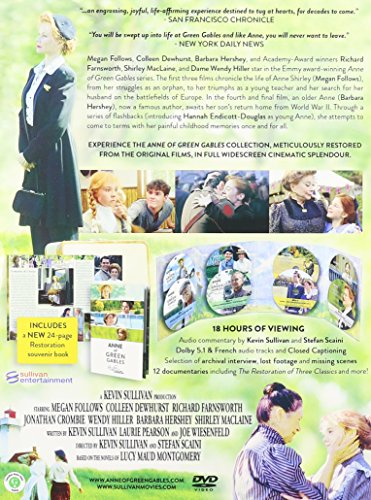 Megan Follows, Colleen Dewhurst, Barbara Hershey, and Academy-Award winners Richard Farsnworth, Shirley MacLaine, and Dame Wendy Hiller star in the Emmy award-winning Anne of Green Gables series. The first three films chronicle the life of Anne Shirley (Megan Follows), from her struggles as an orphan, to her triumphs as a young teacher and her search for her husband on the battlefields of Europe. In the fourth and final film, an older Anne (Barbara Hershey), now a famous author, awaits her son's return home from World War II. Through a series of flashbacks (introducing Hannah Endicott-Douglas as young Anne), she attempts to come to terms with her painful childhood memories once and for all. Experience the Anne of Green Gables series like you ve never seen it before: meticulously restored from the original films, in full cinematic splendour. This widescreen collection serves as a touchstone for Anne fans, and is certain to cultivate lifelong kindred spirits as it finds new audiences.
Shrink-wrapped