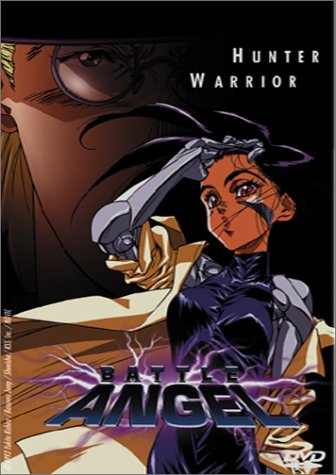 Known as Gunnm in Japan and then Battle Angel Alita to Western manga readers, Battle Angel (in all of its incarnations) is now part of the canon of Blade Runner-inspired anime cyberpunk.

The film version follows a "Hunter Warrior" and cyborg healer named Ido. Ido formerly lived in the floating land of Zalem (Tiphares in the book), the paradise that hovers over the refuse heap of Scrap Iron City in which he now resides with his former lover, Chiren. In his travels as a bounty hunter (killing spine thieves in a world in which human nerve tissue has become the most precious commodity), Ido one day discovers and repairs the remnants of a cyborg whom he names Gally (Alita in the manga). Though possessing the body of a young woman, Gally embodies Ido's most sophisticated and lethal cybernetic skill. In the first episode on the DVD, "Rusty Angel," Gally challenges Chiren's own creation, Greweicia--a brain-eating gladiator--to a death match. In "Tears Sign" Gally discovers that her first love, Yugo, has put himself in the employ of the spine trader Vector so that he can earn his way, he thinks, to Zalem. Gally confronts her fellow bounty hunters to protect Yugo, only to watch him horribly wounded in a plot to capture her for Vector.

Yukito Kishiro's finely detailed line drawings in the original manga (like a cleaner version of Miyazaki's style in the Nausicaa books) are impossible to translate into film. What the film loses in detail, however, it makes up for in its intense action sequences and shadowy mixtures of color and a darkly cinematic soundtrack. Anime fans should be prepared for some pretty graphic violence--including some horrific scenes of decapitation. Also, the action keeps the plot moving at breakneck speed, so character development often seems to happen in leaps; you'll want to read the books to learn more about Gally/Alita and her world.

For English speakers, the DVD is best watched in the original Japanese with subtitles. The dubbing seems to raise the pitch of everyone's voice, changing the mood of the film from tragic-cool to slightly comical. Gally's English is especially annoying. With her original Japanese voice (sometimes childlike and sometimes a seductive whisper), she is a perfectly deadly heroine with a leather-clad style that anticipates The Matrix. --Patrick O'Kelley