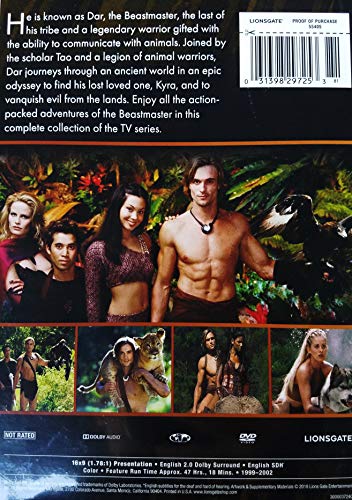 He is known as Dar, the Beastmaster (Daniel Goddard), the last of his tribe and a legendary warrior gifted with the ability to communicate with animals. Joined by the scholar Tao (Jackson Raine) and a legion of animal warriors, Dar journeys through an ancient world in an epic odyssey to find his lost loved one, Kyra (Natalie Jackson Mendoza), and to vanquish evil from the lands. Enjoy all the action-packed adventures - over 48 hours! - of the Beastmaster in this complete series collection of the cult TV series! The series also featured Monika Schnarre as the Sorceress, apprentice to the Ancient One, played by Grahame Bond, Emilie de Ravin as the Forest Demon named Curupira, and Sam Healy as Iara, the Demon of Water and Serpent. The regular human enemy of Dar, King Zad, was played by Steven Grives. Marc Singer, the Beastmaster from the original film, appears in the third season as Dartanus, the Spirit Warrior who helps Dar on his quest.