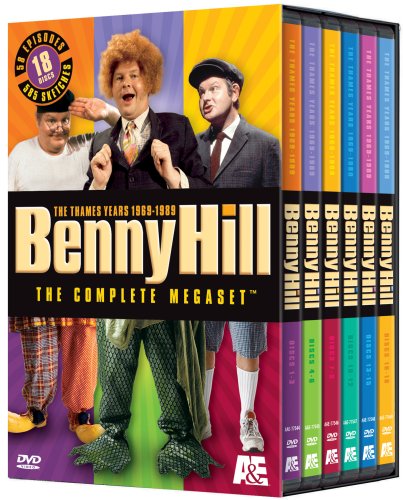 The undisputed Funniest Man on Television Benny Hill pioneered a naughty new direction for the sketch-comedy variety show and pushed TV broadcasting to new levels of bawdiness as he electrified audiences all over the world with The Benny Hill Show. This show-stopping collection on 18 DVDs captures every classic comedic moment from the Merry Master of Mirth in his hey day!

BENNY HILL: COMPLETE AND UNADULTERATED: THE COMPLEAT COLLECTION contains Benny s raucous 20-year reign over television s-sketch variety genre, from the naughty early years to the debut of the nubile Hill s Angels through the final episodes. Witness to the birth of crazy caricatures like Fred Scuttle, Chow Mein, and Pierre de Terre. Laugh out loud as Benny and his bevy of buxom babes flaunt their racy rowdiness and tongue-in-cheek satire in characteristically outrageous sketches like The Little Dimpton Street Party and The Crook Report. These 58 vintage episodes originally aired from 1969 to 1989, contain nearly 600 memorable sketches and deliver a comedy high kick that is quintessentially Benny.

Never aired in the U.S. in full-length form, this complete collection of the Thames episodes of The Benny Hill Show presents a rare opportunity to view every saucy, unforgettable moment from one of the most uproarious and celebrated programs in television history.

DVD Features: Bonus Documentary: The World s Favorite Clown; The Benny Hill Cheeky Challenge Trivia Quiz # 1-6; Benny Hill: Laughter and Controversy Episode of A&E s Award-Winning Series BIOGRAPHY; Eddie in August; I Was A Hill s Angel Featurette; Hill s Angels: Off the Record Featurette; Hill s Angels: In Conversation Featurette
The bawdy humor of Benny Hill has attracted fans from the far flung reaches of the globe. It seems to matter little that his style is quintessentially British, for Benny is able to produce an aching belly laugh no matter where he touts his wares. His years spent making programs for Thames Television are among the most fondly remembered by his fans, and they've been restored from the vaults and