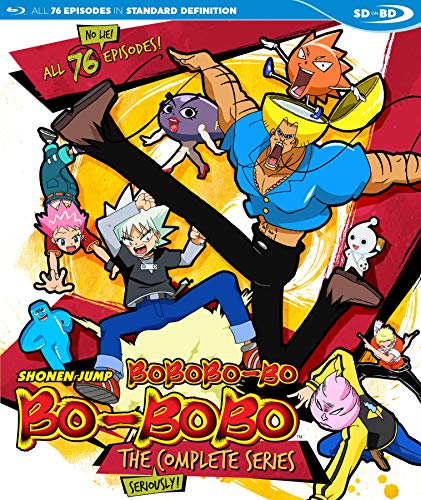 English language dub, Japanese with English subtitles, all 76 episodes in standard definition, Region A disc. In a world where hair is freedom, only one man is brave enough to defend the follicles of the innocent from the militant Hair Hunt troops of the Maruhage Empire: BOBOBO-BO BO-BOBO! A master of the Fist of the Nose Hair, Bo-Bobo and his gleaming golden afro team up with a girl named Beauty to defeat the evil Empire and its leader, Baldy Bald the 4th. The duo's hair-raising adventures will weave them across the globe as they meet a hilarious and buzz-arre cast of new friends and brush off an even weirder list of foes. This comical adventure is surely a cut above the rest that will leave you dye-ing with laughter! Along with the English dub, this release features full English subtitles with the original Japanese dub for the first time ever. Now you can be delightfully confused by the jokes in either language!
Tweet