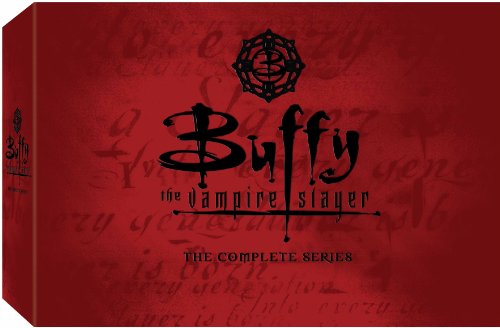 From its charming and angst-ridden first season to the darker, apocalyptic final one, Buffy the Vampire Slayer succeeds on many levels, and in a fresher and more authentic way than the shows that came before or after it. How lucky, then, that with the release of its boxed set of seasons 1-7, you can have the estimable pleasure of watching a near-decade of Buffy in any order you choose. (And we have some ideas about how that should be done.) First: rest assured that there's no shame in coming to Buffy late, even if you initially turned your nose up at the winsome Sarah Michelle Gellar kicking the shit out of vampires (in Buffy-lingo, vamps), demons, and other evil-doers. Perhaps you did so because, well, it looked sort of science-fiction-like with all that monster latex. Start with season 3 and see that Buffy offers something for everyone, and the sooner you succumb to it, the quicker you'll appreciate how textured and riveting a drama it is. Why season 3? Because it offers you a winning cast of characters who have fallen from innocence: their hearts have been broken, their egos trampled in typically vicious high-school style, and as a result, they've begun to realize how fallible they are. As much as they try, there are always more monsters, or a bigger evil. Despite this, or perhaps because of it, the core crew remains something of a unit--there's the smart girl, Willow (Alyson Hannigan) who dreams of saving the day by downloading the plans to City Hall's sewer tunnels and mapping a route to safety. There are the ne'r do wells--the vampire Spike (James Marsters), who both clashes with and aspires to love Buffy; the tortured and torturing Angel (David Boreanz); the pretty, popular girl with an empty heart (Charisma Carpenter); and the teenage everyman, Xander (Nicholas Brendon).
The "Buffy the Vampire Slayer Collector's Set: The Chosen Collection" combines all 144 episodes of Buffy the Vampire Slayer, plus a bonus disc with exclusive material: Introduction by Joss Whedon, Back to the Hellmouth: A Conversation with Creators and Cast, Breaking Barriers: It's Not a Chick Fight Thing, Love Bites: Relationships in the Buffyverse, Evil Fiends, Buffy: An Unlikely Role Model, Buffy Cast and Crew: Favorite Episodes
Tweet