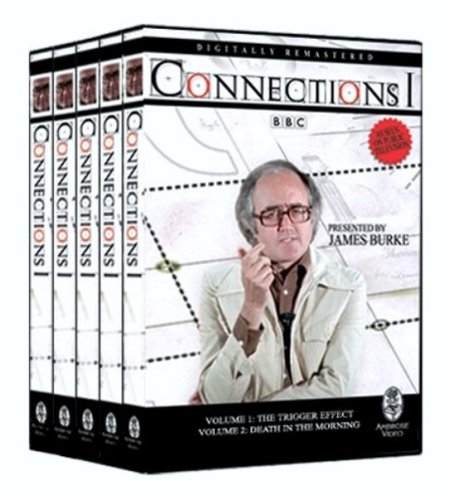 This ten volume series was made in 1978 by turning science into a detective story, James Burke creates a series that will fascinate students and adults alike. This interdisciplinary approach has never before been applied to history or science and it succeeds tremendously. Winner of the Red Ribbon in the American Film Festival, the scope of the series covers 19 countries and 150 locations, requiring over 14 months of filming.

As the Sherlock Holmes of science, Burke tracks through 12,000 years of history for the clues that lead us to eight great life changing inventions-the atom bomb, telecommunications, the computer, the production line, jet aircraft, plastics, rocketry and television. Burke postulates that such changes occur in response to factors he calls triggers, some of them seemingly unrelated. These have their own triggering effects, causing change in totally unrelated fields as well. And so the connections begin...

Programs in the series:
The Trigger Effect
Death in the Morning
Distant Voices
Faith in Numbers
The Wheel of Fortune
Thunder in the Skies
The Long Chain
Eat, Drink and Be Merry
Countdown
Yesterday, Tomorrow and You