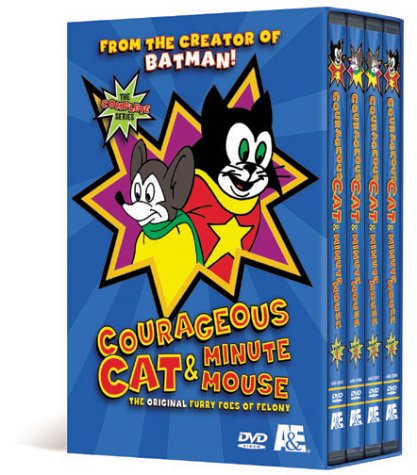 Comic book and comic strip artist Bob Kane (1916-1998) is best known as the creator of Batman (1939), but he entered animation later in his career. His first effort was a spoof of his most famous character: Courageous Cat & Minute Mouse, which debuted in syndication in 1960. Unlike most cat-and-mouse pairs, Courageous and Minute were allies, fighting crime in Empire City. Four or five of the five-minute mini-stories were shown on each half-hour program. Courageous is a generic-looking cartoon cat, while Minute suggests a bargain-basement copy of Mickey. The animation is almost as limited as Crusader Rabbit or Rocky and Bullwinkle, but without the outrageous humor. The one running gag in the series is Courageous's Catgun, which can shoot a noose, disintegrator rays, a cannonball repeller--everything but a bullet. It proves useful against such villains as Professor Shaggy Dog, Rodney Rodent, Flat-Face Frog, and Iron Shark.

This four-disc set includes all 130 five-minute episodes, but the prints have faded badly and there's no evidence of any restoration work. Baby boomers (or Gen-Xers) who grew up on the program may get a nostalgic buzz from watching one or two episodes, but sitting through more than a few quickly cloys. Courageous Cat & Minute Mouse was never a great series, a fact that's more obvious four decades after its debut. Kane went on to develop a second spoof, the marginally superior Cool McCool (1966), a send-up of Get Smart. (Unrated; suitable for ages 5 and older: cartoon violence, tobacco use) --Charles Solomon