Curb Your Enthusiasm: The Complete Seasons 1-6 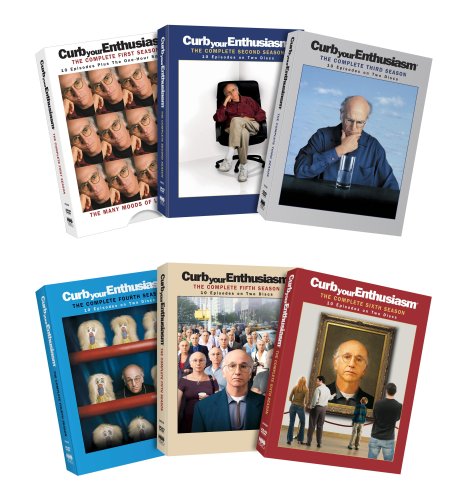 Curb Your Enthusiasm is the brainchild of star-creator Larry David who co-created Seinfeld and was the basis for the easily rattled George Costanza (who was played by Jason Alexander). Like George, David has a tendency to speak too much, blow things out of proportion, and, most often, fail in the end (and often liking it that way). David's new show is also like its predecessor: it's about "nothing" except following the day-to-day ramblings of a sometime writer and comic (this time in L.A.). Eternal questions stemming from universal daily dilemmas are honed to perfect comedic absurdity. A notable exception is the show is only scripted by plot; much of the action is improvised. David plays "himself" (as does his friend, Richard Lewis) although his manager and wife are played by comedians Jeff Garlin and Cheryl Hines. Although it is a comedic gem, one can't take more than an episode or two at a time - it's acidic, biting comedy. The episodes are often built like a house of cards, which the irritable David will surely collapse by the end. Like another caustic TV character, Dabney Colman's Buffalo Bill (1983-84), Larry David is not for everybody.
Curb Your Enthusiasm: The Complete First Season He's got it all, a loving wife, good friends, a successful career, a good home. What could go wrong for Larry David? CURB YOUR ENTHUSIASM stars "Seinfeld" co-creator Larry David as himself in an unsparing, cinema verite depiction of his life. Featuring real life celebrities playing themselves, the episodes are improvised by the actor
Tweet