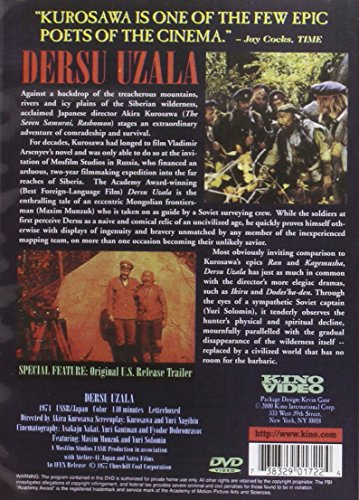 For decades, Kurosawa had longed to film Vladimir Arsenyev's novel and was only able to do so at the invitation of Mosfilm Studios in Russia, who financed an arduous, two-year filmmaking expedition into the far reaches of Siberia. The Academy Award-winning (Best Foreign Language Film) Dorsum Uzala is the enthralling tale of an eccentric Mongolian frontiersman (Maxim Munzuk) who is taken on as a guide by a Soviet surveying crew. While the soldiers at first perceive Dersu as a naive and comical relic of an uncivilized age, he quickly proves himself otherwise with displays of ingenuity and bravery unmatched by any member of the inexperienced mapping team, on more than one occasion becoming their unlikely savior.
Factory sealed DVD