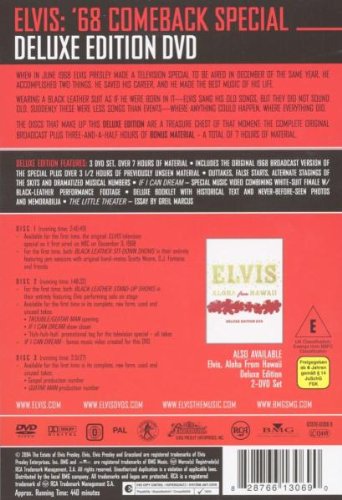 When in June 1968 Elvis Presley made a television special to be aired in December of the same year, he accomplished two things. He saved his career, and he made the best music of his life. Wearing a black leather suit as if he were born in it-Elvis sang his old songs, but they did not sound old. Suddenly there were fewer songs than events-where anything could happen, where everything did. The discs that make up this DELUXE EDITION are a treasure chest of that moment: The Complete Original Broadcast plus three-and-a-half hours of BONUS MATERIAL - a total of 7 hours of material. DELUXE EDITION FEATURES: 3 DVD set, over 7 hours of material ♦ Includes the original 1968 broadcast version of The Special plus over 3 1/2 hours of previously unseen material ♦ Outtakes, false starts, alternate stagings of the skits and dramatized musical numbers ♦ IF I CAN DREAM - Special music video combining white-suit finale with black-leather performance footage ♦ Deluxe booklet with historical text and never-before-seen photos and memorabilia