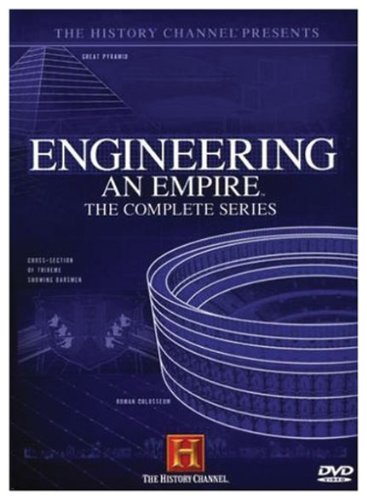 The Parthenon. Chichén Itzá. The Pyramids. Their scale, complexity, and sheer beauty stand as permanent reminders of the indomitable strength and ingenuity of the human spirit.

ENGINEERING AN EMPIRE: THE COLLECTOR S EDITION circles the globe to re-examine history s most magnificent civilizations by surveying the architectural and engineering triumphs they left behind. Beginning more than five-thousand years ago with the mind-boggling construction feats of the ancient Egyptians, the 14 documentaries--including two feature-length specials--in this collection revive the spectacular glory of the past, from the great temples of Greece to the majestic and mysterious Tenochtitlan. Cutting-edge CGI graphics and stunning location footage reanimate the ancient streets of such cities as Carthage and Rome, while expert interview trace the rise of each empire and the technological achievements that paved the way for their gravity-defying masterpieces.

Hosted by Peter Weller, ENGINEERING AN EMPIRE: THE COLLECTOR S EDITION unites each riveting moment of this critically-acclaimed and Emmy Award-winning series to reveal the innovation and infrastructure behind the world s most dazzling empires.