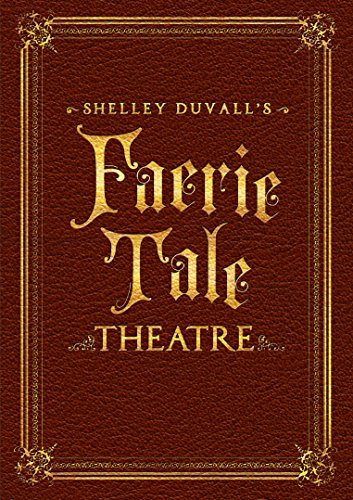 One of the first gems of the cable TV age, Faerie Tale Theatre brings 26 classic tales to life. Produced over a five-year span (1982-87) for Showtime, FTT brought together creative dramatics and whimsical writing with some of the top talents of the day. Executive producer/host Shelley Duvall (who was coming off her breakout role in The Shining) shepherds this mix of theatrical simplicity and grand storytelling for these oft-told tales (Goldilocks and the Three Bears, Little Red Riding Hood, Hansel and Gretel, Sleeping Beauty,and the like) for kids and their parents. Since they are not elaborately produced, FTT may be a hard sell for some smaller members of the family at first, but most should be hooked, even older kids who may pooh-pooh fairy tales. There's always a slight twist that makes these productions fresh.

The cast is amazing, especially when you think how lightly cable television was thought of in the '80s: Jeff Bridges, Bud Cort, Liza Minnelli, James Coburn, Susan Sarandon, Christopher Reeve, Klaus Kinski, Billy Crystal, Matthew Broderick, Gregory Hines, Eric Idle, Robin Williams, and Mick Jagger are some of the talented--and varied--actors appearing. Crystal's take on the smart 3 Little Pigs (with Jeff Goldblum as the wolf) and Williams's Frog Prince are two comic gems. Malcolm McDowell, right in the middle of his career high-point of playing baddies, brings flair to the Big Bad Wolf, while his then-real-life wife Mary Steenburgen beautifully counterpoints as Red Riding Hood. The casting of Vincent Price and Vanessa Redgrave in Snow White is inspired. Also impressive are the directors Duvall pooled: Tim Burton (Aladdin and His Wonderful Lamp), Francis Ford Coppola (Rip Van Winkle) Peter Medak (three episodes), Nicholas Meyer (Pied Piper), and Roger Vadim (Beauty and the Beast). You can go on for days about these wonderful tales, most totaling around the 45-minute mark, but it's better just to get the set and start wherever you'd like; you will get to the end sooner than you think. --Doug Thomas
Shrink-wrapped