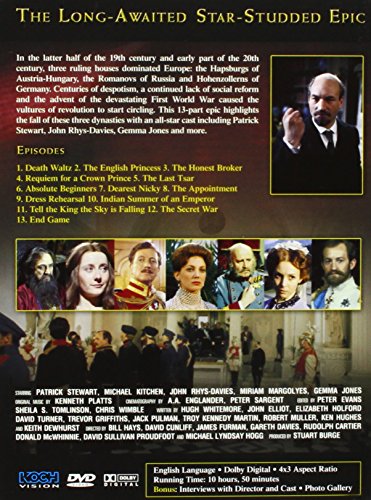 In the latter half of the 19th century, three ruling houses dominated Europe: the Hapsburgs of Austria-Hungary, the Romanovs of Russia and Hohenzollerns of Germany. Centuries of despotism, a continued lack of social reform and the advent of the devastating First World War caused the vultures of revolution to start circling. This 13-part epic drama features an all-star cast including Patrick Stewart, Gemma Jones, John Rhys-Davies, Gayle Hunnicutt and more!
Fall of Eagles is the BBC's stunning 1974 dramatisation of the declining years and final collapse of three of the most powerful European dynasties the Hapsburgs, Romanovs and Hohenzollerns between the mid-19th century and the end of the First World War. The series focuses on the tempestuous reigns of Emperor Franz Josef of Austria-Hungary (Laurence Naismith), Tsar Nicholas II of Russia (Charle