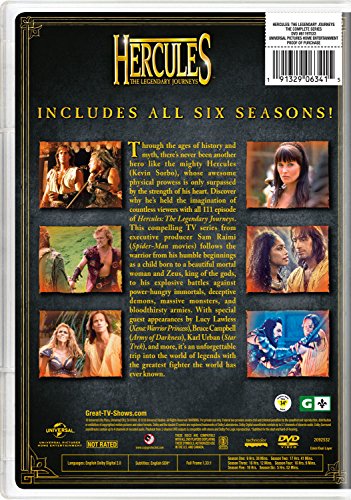 Through the ages of history and myth, there's never been another hero like the mighty Hercules (Kevin Sorbo), whose awesome physical prowess is only surpassed by the strength of his heart. Discover why he's held the imagination of countless viewers with all 111 episode of Hercules: The Legendary Journeys. This compelling TV series from Executive Producer Sam Raimi (Spider-Man movies) follows the warrior from his humble beginnings as a child born to a beautiful mortal woman and Zeus, king of the gods, to his explosive battles against power-hungry immortals, deceptive demons, massive monsters, and bloodthirsty armies. With special guest appearances by Lucy Lawless (Xena: Warrior Princess), Bruce Campbell (Army of Darkness), Karl Urban (Star Trek), and more, it's an unforgettable trip into the world of legends with the greatest fighter the world has ever known.
Shrink-wrapped