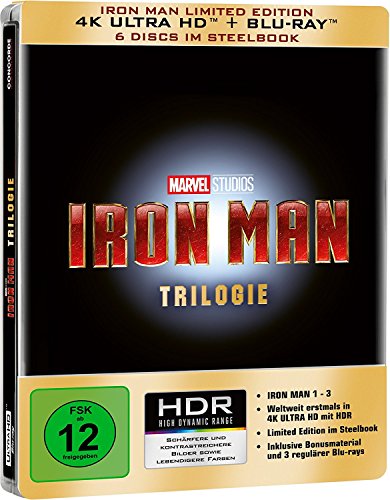 The Iron Man Trilogy 4K UHD Blu-ray presentation offers even more exclusive content for an incredible entertainment experience. Robert Downey Jr stars as Tony Stark, the billionaire owner of Stark Industries, a corporation that specialises in weapons development. In 'Iron Man' (2008) Stark is kidnapped by terrorists in Afghanistan and is made to construct a devastating weapon. However, realising the consequences that this could have on the world, he builds a high-tech suit of armour and uses it to escape from captivity. When Stark discovers a conspiracy that could have serious repercussions, he uses his new invention to try and stop the villains and save the world. In 'Iron Man 2' (2010) the armoured superhero returns with the world now aware of his dual identity. Stark faces pressure from the government, the press and the public to share his technology with the military. With Pepper Potts (Gwyneth Paltrow) and James 'Rhodey' Rhodes (Don Cheadle) at his side, Stark fights to protect his suit by forging new alliances and confronting powerful new enemies. In 'Iron Man 3' (2013) Stark's personal life comes under attack. As he sets out to discover who is responsible he finds himself coming face-to-face with The Mandarin (Ben Kingsley), the villainous commander of a terrorist group. With the lives of his loved ones in danger, Stark fights to save them and in the process begins to consider the truth about the connection between him and his powerful suit.
Tweet