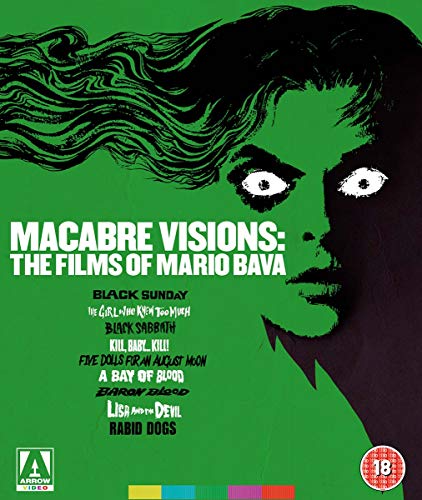 
The legendary Mario Bava has inspired generations of filmmakers, including names as wide-ranging as Martin Scorsese, Tim Burton and Guillermo Del Toro. With their virtuoso photography and budget-belying visual effects, his films transcend their unassuming origins and played a vital role in shaping the horror movie as we think of it today. This exclusive collection from Arrow Video gathers together nine films from Bava s diverse catalogue including gothic horrors, giallo thrillers and even a real-time crime drama.

Our journey through the maestro s output begins with Black Sunday, the ground-breaking gothic shocker that defined the Italian horror film, before launching the giallo phenomenon with the twisty The Girl Who Knew Too Much. Up next is a triple bill of terror with the gruesome anthology Black Sabbath, followed by a further slice of the macabre with the spine-tingling Kill, Baby... Kill! Next, Bava channels his inner Agatha Christie with the Ten Little Indians-inspired Five Dolls for an August Moon, followed by the proto-Friday the 13th slasher A Bay of Blood (aka Twitch of the Death Nerve). Bava then returns to his horror stomping ground with the twisted and atmospheric Baron Blood and his surreal classic Lisa and the Devil widely considered to be his masterpiece. The collection concludes with Rabid Dogs (aka Kidnapped), a gritty, frenetic crime thriller that grabs the viewer by the throat and refuses to let go.

This stunning collection represents one of Italian cinema s unsung heroes at the height of his creativity, ably assisted by a diverse and talented cast of cult actors, including Barbara Steele (The Pit and the Pendulum), Telly Savalas (Kojak), John Saxon (Tenebrae), Edwige Fenech (Strip Nude For Your Killer), Erika Blanc (The Night Evelyn Came Out of the Grave) and Boris Karloff (The Comedy of Terrors). Whether you re a newcomer to these films or experiencing them for the umpteenth time, Macabre Visions: The Films of Mario Bava is a must-have addition to your library. 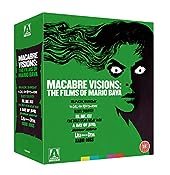