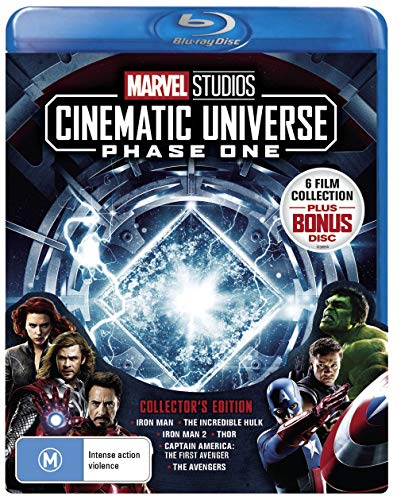 Iron Man
When jet-setting genius-industrialist Tony Stark (Robert Downey Jr) is captured in enemy territory, he builds a high-tech suit of armour to escape. Now, he's on a mission to save the world as a hero who's built, not born, to be unlike any other.

The Incredible Hulk
Bruce Banner, a scientist on the run from the U.S. Government, must find a cure for the monster he turns into, whenever he loses his temper.

Iron Man 2
The world is aware that billionaire inventor Tony Stark is the armoured Super Hero Iron Man. Under pressure from the government, the press and the public to share his technology with the military, Tony is unwilling to divulge the secrets behind the Iron Man armour because he fears the information will slip into wrong hands. With Pepper Potts (Gwyneth Paltrow) and James Rhodey Rhodes (Don Cheadle) at his side, Tony forges new alliances and confronts powerful new forces.

Thor
The powerful, but arrogant god Thor, is cast out of Asgard to live amongst humans in Midgard (Earth), where he soon becomes one of their finest defenders.

Captain America (Chris Evans) leads the fight as the ultimate weapon against evil! When a terrifying force threatens everyone across the globe, the world's greatest soldier wages war on the evil HYDRA organisation, led by the villainous Red Skull (Hugo Weaving).

Iconic Marvel Super Heroes Iron Man, The Incredible Hulk, Thor and Captain America assemble for the first time ever. When an unexpected enemy emerges that threatens global safety and security, Nick Fury, Director of the international peacekeeping agency S.H.I.E.L.D., finds himself needing a team to pull the world back from the brink of disaster.
Tweet