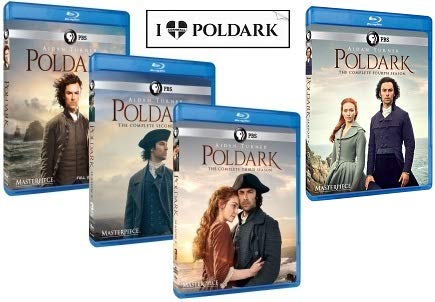 Includes Free Collectable Sticker and Four Complete Seasons with Bonus Special Feature Content! Based on the novels by Winston Graham and set on Cornwall's dramatic coastline, this striking saga stars Aidan Turner as Ross Poldark, Eleanor Tomlinson as the fiery Demelza, and includes a special appearance by Robin Ellis who played the original Ross Poldark in the 1970s. In Season One Captain Poldark returns to Cornwall after the American Revolution to find England in the grip of recession and realizes his fighting days are far from over. Feeling betrayed by everything he loves, Ross must rebuild his life, embarking on a risky business venture, facing new adversaries, and finding love where he least expects it. The drama continues in Season 2 with riot and revolution in the air. Ross must fight for his freedom and he risks everything in a desperate venture. But can he save himself? In Season 3 it's 1794 as war and the revolution in France hang over Britain. In Cornwall, Ross and Demelza attempt to keep the peace and repair their relationship. Facing battles both at home and abroad, will Ross answer the call and risk losing everything he holds dear? In Season 4, with the country gripped by political uncertainty, Ross seeks to challenge George Warleggan's stranglehold over Cornwall while also repairing his marriage with Demelza. Hugh Armitage remains in love with Demelza and is hopeful for more. Dr. Dwight Enys and Caroline plan to start a family while Elizabeth seeks another child to secure her own marriage to George. Meanwhile, Morwenna desperately tries to protect herself from Osborne's advances by threatening their son, and a heartbroken Drake is encouraged by his brother Sam to find new love. This 12 Disc collection offers subtitles in English and over 2 hours of special features, including: Interviews with cast, directors, writer & producer; Episode 1 audio commentary; many featurettes; set tour & much more.