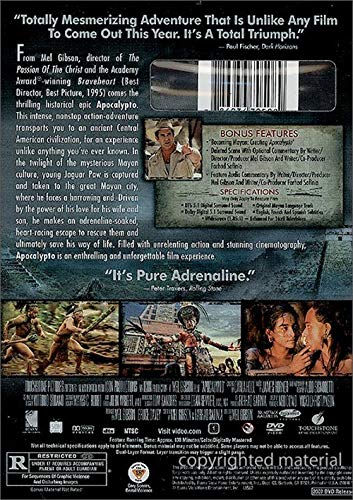 From Mel Gibson, director of THE PASSION OF THE CHRIST and the Academy Award(R)-winning BRAVEHEART (Best Director, Best Picture, 1995) comes the thrilling historical epic APOCALYPTO. This intense, nonstop action-adventure transports you to an ancient South American civilization, for an experience unlike anything you've ever known. In the twilight of the mysterious Mayan culture, young Jaguar Paw is captured and taken to the great Mayan city where he faces a harrowing end. Driven by the power of his love for his wife and son, he makes an adrenaline-soaked, heart-racing escape to rescue them and ultimately save his way of life. Filled with unrelenting action and stunning cinematography, APOCALYPTO is an enthralling and unforgettable film experience.
Special Features
Special Features
Becoming Mayan: Creating Apocalypto Deleted Scene with Optional Commentary by Writer/Director/Producer Mel Gibson and Writer/Co-Producer Farhad Safinia Feature Audio Commentary by Writer/Director/Producer Mel Gibson and Writer/Co-Producer Farhad Safinia