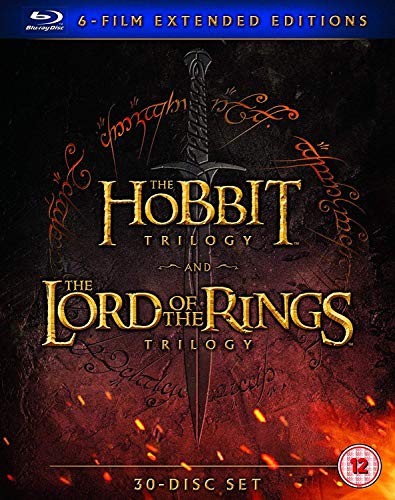 Fellowship of the Ring
Assisted by a fellowship of heroes, Frodo Baggins plunges into a perilous trek to take the mystical One Ring to Mount Doom so it and its magical power can be destroyed and never possessed by evil Lord Sauron.

The Two Towers
Frodo and Samwise press on toward Mordor. Gollum insists on being the guide. Can anyone so corrupted by the ring be trusted? Can Frodo, increasingly under the sway of the ring, even trust himself? Meanwhile, Aragorn, drawing closer to his kingly destiny, rallies forces of good for the battles that must come.

Return of the King
It is time. For Frodo to overcome the wickedness of Gollum, the horrifying attack of colossal arachnid Shelob, and the soul-twisting allure of a ring that resists destruction. For Aragorn to take up the sword of his forebears and the crown of his birthright. And for the mighty clash that Wizard Gandalf calls "the great battle of our time."

An Unexpected Journey
Follow Bilbo Baggins, who - along with Gandalf and 13 Dwarves - is swept into an epic quest to reclaim the lost Dwarf Kingdom of Erebor from the fearsome Dragon Smaug. Along the path, the unassuming Bilbo not only discovers depths of ingenuity and courage that surprise even himself, he also gains possession of a "precious" ring tied to the fate of all Middle-Earth in ways he cannot begin to imagine.

The Desolation of Smaug
The Hobbit Bilbo, the Wizard Gandalf, and 13 Dwarves, led by Thorin Oakenshield, continue their journey to reclaim the Dwarf Kingdom of Erebor. Along the way, they encounter skin-changer Beorn; Wood-elves led by Legolas, Tauriel and King Thranduil; and a Man named Bard, who smuggles them into Lake-town.

The Battle of the Five Armies
Thorin Oakenshield and the Dwarves of Erebor have reclaimed the vast wealth of their homeland, but now face the consequences of having unleashed the terrifying Dragon Smaug upon Lake-town.
Region free