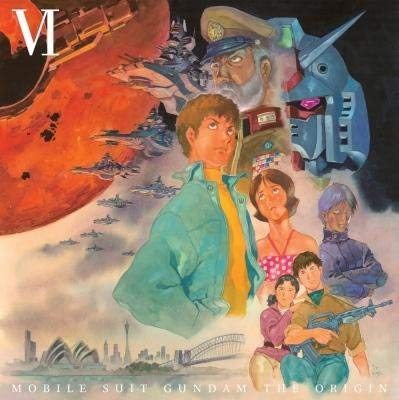 This collector's edition of Mobile Suit Gundam The Origin 6 is imported from Japan and comes with a 412-page storyboards and setting art book, a 32-page booklet featuring comic text by Yoshikazu Yasuhiko, a 10-page cell and line art illustrations book, a 12-page special booklet, a poster of the storage box illustrated by Yasuhiko, and a sleeve O-card illustrated by Yasuhiko, all in a storage box illustrated by Yasuhiko. (Book and booklets are in Japanese only.) January 23, Universal Century 0079. The battlefield has shifted to Loum, and a clash between the Zeon and Earth Federation fleets has begun in earnest. Char Aznable, a young ace pilot of the Zeon forces, earns fame for his remarkable feats at the controls of his red Zaku mobile suit, and becomes known as the "Red Comet." After the fierce battle, as the Zeon and Federation sides take their places at the negotiating table, a certain declaration is transmitted throughout the world. Meanwhile, the Federation Forces launch "Operation V," their plan for a counterattack. And a boy named Amuro Ray, living a peaceful life at Side 7, takes action on his own to investigate the mystery of the new weapon called "Gundam..." Special Features: (Japanese Audio ONLY - No English Subtitles!) Staff and Cas(more...)
Tweet