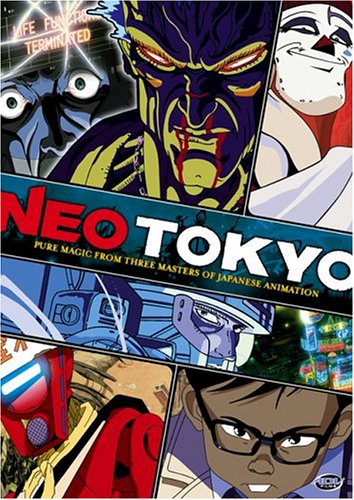 *Rintaro’s "Labrynth" is an elegant fantasy exploring a little girl’s impressionable imagination: The beginning of the three stories opens with a girl who, while keeping herself entertained at home with her pet cat, finds herself transported to a mysterious world. As she wanders the streets of this new world, surrounded by creatures of all sizes and shapes, she makes her way to an entrance that leads her to a tent. She is invited inside by a clown and she and her cat go inside to find… *Kawajiri’s "The Running Man" is a high-octane futuristic thriller revolving around a deadly formula-1 race: Bob Stone is writing a story about a legendary race car driver, Zach Hugh. A man who has been at the very top of a brutal race called Deus Ex for close to ten years. What Bob Stone finds is a man whose sheer will and tenacity has transcended this realm leaving the racer’s body and mind in tatters. In the end, Zach Hugh’s inhuman will leads him on a road of ruin. *Otomo’s "The Order to Stop Construction" is a Bradbury-esque allegory speculating on the dangers of man’s over-reliance with technology: Deep in the jungles of the Aloana Republic is a construction project gone amuck. A coup d’etat leaves a new power in charge of the government which demands the immediate termination of the construction. Tsutomu Sugioka is an employee who is charged with venturing deep into unfamiliar territory to invetigate what has happened to the on-site supervisor whom the company has lost contact and to halt the construction project.
Tweet