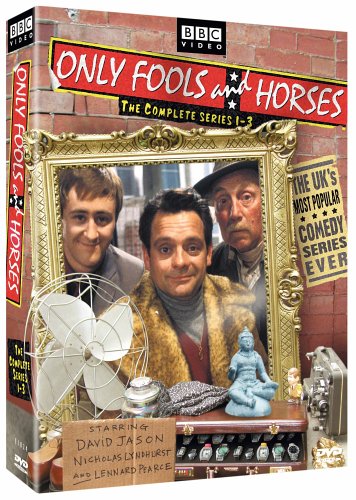 Often touted as the best British sitcom ever, Only Fools and Horses tells the story of the crafty cockney huckster Derek Trotter (David Jason), who has finally found the perfect scheme which he is convinced will make him a millionaire within a year! Del's kid brother Rodney (Nicholas Lyndhurst) and his sweet but doddery old granddad (Lennard Pearce) have seen 'em all, however, from the one-legged turkeys to the Old English vinyl briefcases which no one can open. Even the Trotter's car, the 3-wheeled Robin Reliant, is forever slightly off balance. Brilliantly written and populated by a colorful cast of characters, Only Fools and Horses boasts 13 top comedy awards including 2 British Academy Awards for Best Comedy Series, and its 2002 Christmas special was viewed by 2 out of 3 households in the U.K. As Del-boy himself would say: "Lovely jubbly!"