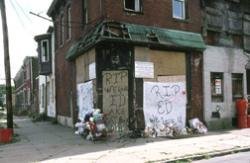 
Poet of Poverty shares the words of an Irish priest who came to Camden, New Jersey, 40 years ago and never left. They are the extraordinary words of a natural-born poet, Father Michael Doyle, the Poet of Poverty.

Father Doyle's words bear witness to a horrendous crime: the total neglect of America's poorest city, Camden, New Jersey. They began as words written for monthly letters that serve as a lifeline to those who support his Catholic church. But, as a friend once told Doyle, these prose-poem letters are really his ministry.

Using Michael Doyle's letters as its subject, the film is a record of his parish and city -a documentation of the consequences of poverty. Camden, already poor when Doyle arrived, now resembles nothing more than bombed-out urban landscape. "Yet we have to live in the meantime," writes Doyle. And his letters are a testimony to the lives lived amidst urban decay, drug trade, murders, and prostitution. They are also a stark reminder of the lives lived in a dumping ground, filled with everything that the surrounding wealthy communities don't want in their own back yards: sewage, trash, scrap metal, and prisons.

There is anger in Doyle's letters, and sadness and despair.

Published and distributed by Filmakers Library.

All films purchased from Filmakers Library include Public Performance Rights, allowing an institution to exhibit a legally-acquired copy, so long as:

No admission fee/donation is collected.

The screening takes place at the purchasing venue itself.

The primary audience for the screening is members of the purchasing institution (for example, students and faculty of a school) and the screening IS NOT advertised or promoted to the general public.