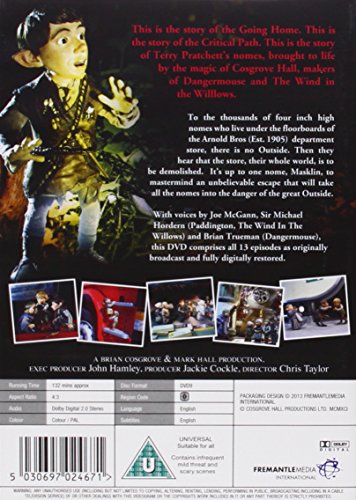 FIRST TIME ON DVD & DIGITALLY RESTORED - Terry Pratchett's Truckers is released on DVD in its original broadcast format. It was previously available only on VHS as a cut down feature length episode. Broadcast on ITV from 10 January 1992 through to 3rd April 1992, this much loved stop animation TV series is from the revered production house Cosgrove Hall, the makers of Dangermouse. All 13 episodes. The first book by Terry Pratchett to be adapted for either the small or big screen, Truckers brings to life the story of the Nomes. 15,000 years ago the Nomes crashed to Earth in a scout ship from the starship Swan. Generations of them have come and gone with the passing years and the changing countryside. Suddenly faced with extinction, the ten surviving Nomes, guided by their reluctant leader Masklin, must face many exciting adventures during their search for a new home and hiding place in the big, bad world of the humans. Voices include: Joe McGann, Sir Michael Horden, Brian Trueman, Debra Gillett