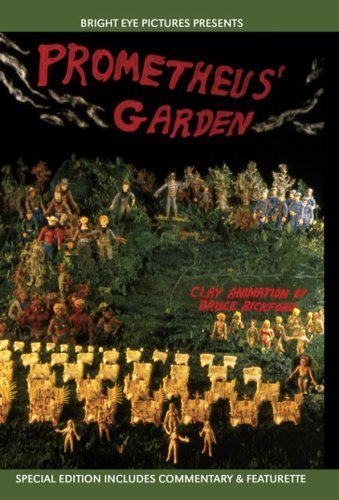 Best known for his collaborations with rock iconoclast Frank Zappa in the 1970s (Dub Room Special, Baby Snakes, The Amazing Mr. Bickford), underground animator Bruce Bickford has influenced generations of artists with his startlingly original vision. Prometheus Garden (28 minutes, 1988) is the only film over which Bickford maintained complete creative control. Inspired by the Greek myth of Prometheus, a Titan who created the first mortals from clay and stole fire from the gods, Prometheus Garden immerses viewers in a cinematic universe unlike any other. The dark and magical images of this haunting film unfold in a dreamlike stream of consciousness revealing an unlikely cast of clay characters engaged in a violent struggle for survival. Like all Bickford films, Prometheus Garden defies description and simply must be experienced. In Clay Animation, film scholar Michael Frierson writes: Bickford offers us a visionary landscape, a hallucinogenic retreat into magical settings where figure and ground may transform into the other at any moment, enchanted settings in which modern technocrats are easy villains and nature is under siege. Bickford is an underground artist who has mystified animation critics and inspired generations of animators, while somehow eluding fame. He has been described as the worlds only outsider artist working in the medium of animation. He has been recognized as a genius by Frank Zappa and countless other iconoclasts. One thing is certain: Bickford is a true original. In his collaborations with Frank Zappa in the 1970s, Bickford relinquished creative control of his work (which was edited and scored by Zappa). Consequently, Prometheus Garden is Bickfords most comprehensive and least compromised vision.
Tweet