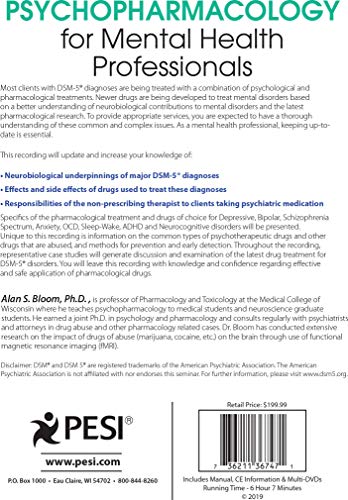 This seminar will update and increase your understanding of:
-The neurobiological underpinnings of major DSM-5® diagnoses
-The types and effects of drugs used to treat these diagnoses
-The responsibilities of the non-prescribing therapist to clients taking psychiatric medication

Specifics of the pharmacological treatment and drugs of choice for the DSM 5® Depressive, Bipolar, Schizophrenia Spectrum, Anxiety, OCD, Sleep-Wake, ADHD and Neurocognitive disorders will also be discussed. Unique to this seminar is information on the common types of psychotherapeutic drugs that client s abuse (prescription drug abuse) and methods for prevention and early detection.

Objectives
-Explain the neurotransmitter systems and neuroanatomy underlying the biological basis for mental disorders and pharmacotherapy.
-Define the role of mental health professionals with clients receiving both psychotherapeutic medications and psychotherapy.
-Describe the major classes of drugs used to treat mental disorders and which mental disorders are appropriately treated with each class of drugs.
-Compare and contrast the effects/side effects of antipsychotics, antidepressants, benzodiazepines and other antianxiety agents, anticonvulsants and drugs used to treat other mental disorders including OCD, ADHD, and cognitive impairment.
-Discuss the abuse liability of drugs used in the treatment of anxiety, insomnia, pain and ADHD.
-Describe methods for prevention and early identification of prescription drug abuse.