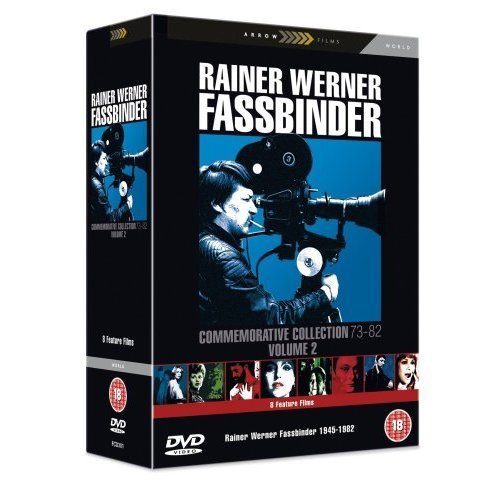 United Kingdom released, PAL/Region 2 DVD: it WILL NOT play on standard US DVD player. You need multi-region PAL/NTSC DVD player to view it in USA/Canada: LANGUAGES: German ( Dolby Digital 2.0 ), German ( Mono ), English ( Subtitles ), SPECIAL FEATURES: Box Set, Interactive Menu, Multi-DVD Set, Scene Access, SYNOPSIS: Rainer Werner Fassbinder not only directed Ali: Fear Eats the Soul (Angst essen Seele auf), but also scripted the film, designed the sets, and produced. Brigitte Mira heads the cast as a lonely German cleaning woman, who enters into an affair with equally lonely--and much, much younger--Moroccan mechanic El Hedi Ben Salem. They marry, despite the shocked, bigoted reactions of those around them. This thinly disguised remake of Douglas Sirk's All That Heaven Allows (cult favorite Sirk was one of Fassbinder's personal heroes) won the international critic's prize at the Cannes Film Festival.Rainer Werner Fassbinder's adaptation of a late 19th-century novel by Theodor Fontane is an austere period piece that may be the least characteristic of the German director's films. The titular heroine, played by Fassbinder regular Hanna Schygulla, is a 17-year-old girl forced into a loveless marriage with an old count. Living as the aristocrat's trophy wife, Effi endures her provincial existence unhappily. Her circumstances lead to a brief affair with a young lieutenant that attracts the attention of the townspeople, but not her unsuspecting husband's. Years later, however, the count discovers the love letters between his wife and her lover. As dictated by convention, he challenges the lieutenant to a duel and throws his wife out of their home. The shamed Effi is forced to live by herself, shunned by society and spurned by her ...Rainer Werner Fassbinder Vol. 2 1973 - 1982 8-DVD Set ( Angst essen Seele auf / Fontane - Effi Briest oder: Viele, die eine Ahnung haben von ihre
Tweet