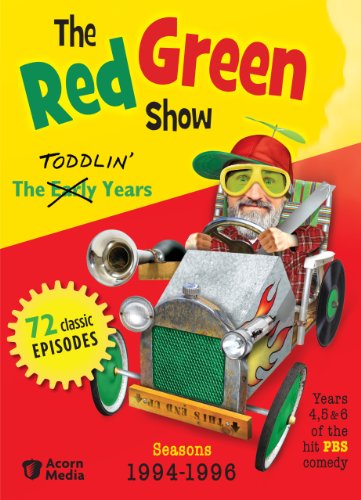 
"Remember, you may have to grow old, but you don't have to mature." So says Red Green, master of all things Canadian, manly, and duct taped. In this collection of seasons four, five, and six of The Red Green Show, Red and the gang are getting older--but certainly no wiser. In three seasons of mayhem, the boys dream up more of the half-baked ideas, crazy contraptions, and unintended consequences that seemed like they would never end, but did, after 15 hilarious years.

These 72 episodes feature series regulars Ranger Gord, Bill Smith, Hap Shaughnessy, and, of course, Red’s beleaguered but beloved nephew, Harold, as well as special guests Graham Greene (Dances with Wolves) and Paul Gross (Due South, Slings & Arrows). Watch and you’ll see, they made no sense then either.

For more laughs than you can shake a hockey stick at, join Red, Harold, and all the guys at Possum Lodge for three more early years of doing what men do when women aren’t around--and some things that are even worse. "The funniest thing to hit public television since Monty Python’s Flying Circus" --The Milwaukee Journal.
Factory sealed DVD