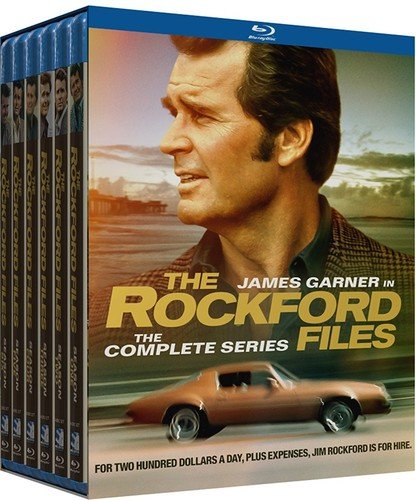 
All Episodes From 6 Seasons Available in High-Definition for the First Time!

The original and quintessential anti-hero detective, Jim Rockford, is on the case! Primetime Emmy® Award-winner James Garner stars as the former crook turned investigator who stays under the radar and takes on the cases of the lost and the dispossessed, chasing down seemingly long-dead clues on the sunbaked streets and seamy alleys of Los Angeles.

Enjoy all the episodes from six seasons filled with wry humor, suspense, and engaging, entangled cases. It's no mystery though why THE ROCKFORD FILES remains one of the most celebrated detective shows.


Emmy® winner James Garner stars as the offbeat Jim Rockford, an ex-con-turned-private-investigator who would rather fish than fight but whose instinct on closed cases is more golden than his classic Pontiac Firebird. From his mobile home in Malibu, this wisecracking private eye chases down seemingly long-dead clues to solve crime in the sun-baked streets and seamy alleys of Los Angeles.


He takes his time, but always solves the crime.

Jim Rockford is back and better than ever in all 22 Season Two episodes of the celebrated detective hit THE ROCKFORD FILES. Join James Garner in his breakout Emmy®-winning role as the cool, calm and collected ex-con-turned-detective who loves to mouth off but avoids using his fists at all costs. Whether it's blackmail, theft, scams or murder, you are along for the ride with his no-nonsense approach and wisecracking wit, it's no mystery that Rockford always gets his man.

SEASON 3
The Rockford Files are open and ready for action!
Reunite with Jim Rockford, the quintessential anti-hero detective, in Season Three of the action-packed, five-time Emmy® Award-winning mystery series THE ROCKFORD FILES! James Garner stars as the wisecracking ex-con-turned-private-eye whose approach to crime is cooler than his sleek Pontiac Firebird and more casual than his mobile home in Malibu. Filled with wry humor, chilling suspense and engaging mysteries, it's an open-and-shut case as long as Rockford is on the chase.

SEASON 4
Open a new file for Jim Rockford!
One of the most celebrated TV detective shows speeds ahead in Season Four of THE ROCKFORD FILES! James Garner returns in his Primetime Emmy® Award-winning role as Jim Rockford, who always has an answer and never has a hesitation. From identity theft to death threats, Rockford uses his experience behind bars to get an inside edge on crooks even the police can't find.

SEASON 5
He takes his time, but always solves the crime.
James Garner returns in Season Five of THE ROCKFORD FILES to chase down underworld mobsters, art thieves, an organ transplant ring and other criminals who never expect to find the world's most unlikely detective behind his easygoing, laid-back demeanor. Enjoy classic Rockford action, devious suspects, and biting mysteries one of the great TV shows of it's time.

SEASON 6
This is Jim Rockford. At the tone, leave your name and message. I'll get back to you.
As the final season of THE ROCKFORD FILES says goodbye - enjoy James Garner as ex-com-turned-private-eye Jim Rockford as he dabbles in the world of the elite, flirts with an old flame, and takes on the mob in the series' last - and most exciting - season. Intelligent and entertaining, it's no mystery why The Rockford Files remains the most celebrated detective show of its time!

Emmy® is the trademark property of ATAS/NATAS.
Shrink-wrapped