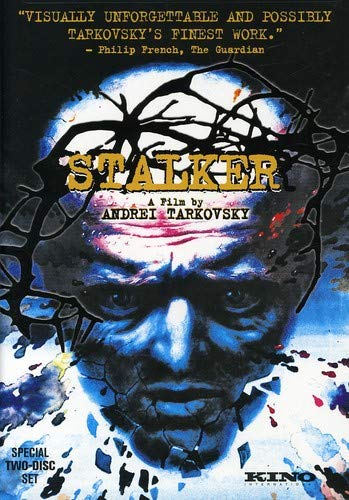 One of Andrei Tarkovsky(Solaris, The Sacrifice) most acclaimed films, Stalker is an unforgettable film experience that evokes the spiritual lucidity of Carl Dreyer and the unbridled imagination of Philip K. Dick. Since its release in 1979, Stalker has inspired filmmakers as diverse as David Lynch and Steven Spielberg and ensnared audiences in a labyrinth of striking imagery revealing the familiar in the strange, the poetic in the disturbing and the mythic in the mordant. In the near future, an unseen alien force has taken possession of an area of Russian wilderness that authorities, have dubbed The Zone. The only thing known for sure about the region is that few who enter it ever return. Led by a Stalker one of a small group of outlaws able to safely navigate the Zone, a renegade scientist and a cynical, burnt out writer penetrate the dangers outside in search of the power and transcendence rumored to exist inside. The Stalker longs to un-do a mysterious physical transformation the Zone has performed on his young daughter. The scientist will risk anything to see that reason triumphs over faith. The writer seeks a germ of inspiration that the crumbling and corrupt world beyond the Zone no longer provides. Together, these three men become desperate pilgrims walking a desolate trail leading to one of the most enigmatic and tantalizing endings in the history of cinema. A haunting and honest meditation on the intersections of science, feeling, and faith.Stalker is both profoundly unsettling and deeply moving.
Factory sealed DVD
Tweet