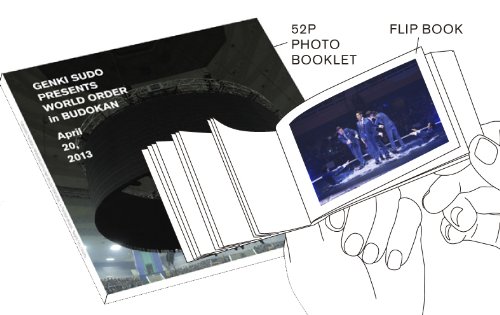 ■ Live Blu-ray & DVD to be the first WORLD ORDER! The complete recording of the Budokan live on the 20th April! ■ in performance does not hold that it is not seen from the performance! Front of the center stage live this is large, To be able to enjoy even when viewed from 360 ° where, for example, changing the part choreography and show off the performance that can not be found only here! ■ I going to record interviews and rehearsal to the Budokan Bonus! [Content commentary] Release of live Blu-ray & DVD that WORLD ORDER is the first time! The complete recording of the pattern of Budokan live performance on April 20! In addition to the performance of the center stage overlooking from 360 °, double quartet (string instrument), Live keyboard is added, showing off the performance of one night as long as it is not seen only here! LED lights are installed monitor a circular, to the stage floor, synchronous performance of video and also a must for overhead center stage! To project without leaving the charm of their performance footage that was taken to make full use of such a circular rail, the world's largest, which is custom-made for live shooting time! After this stage, I do not keep an eye on it in the future movement of WORLD ORDER that go into Chapter 2!
[Special Desc / Benefits] · Making of "WORLD ORDER in BUDOKAN" - "WORLD ORDER ~ CIRCLE" SPECIAL Ver. - "AQUARIUS ~ 2012" SPECIAL Ver.