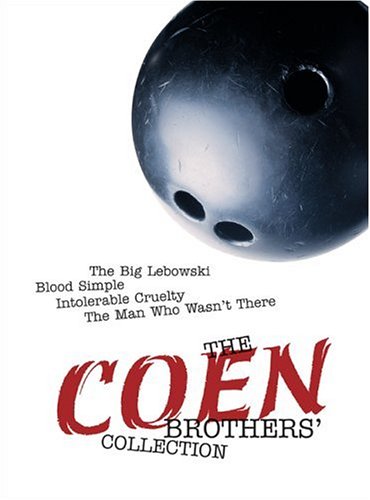 The Big Lebowski: The Coen brothers’ irreverent cult hit comes to DVD as a Collector's Edition, with all-new bonus material. The hilariously twisted comedy-thriller stars Jeff Bridges, John Goodman, Steve Buscemi and Julianne Moore. Join the "Dude" and his bowling buddies on their journey that blends unforgettable characters, kidnapping, a case of mistaken identity and White Russians. Enter the visually unique and entertaining world from the creative minds of the Coen brothers and remember: the Dude abides.

Blood Simple: This critically-acclaimed thriller set in rural Texas combines chilling suspense with offbeat humor to create an all-American version of the classic "film noir." Abby (Frances McDormand) is cheating on her saloonkeeper husband, Marty (Dan Hedaya). The object of her affections is Ray (John Getz), one of Marty's bartenders. Marty hires Visser (M. Emmet Walsh), an unscrupulous detective, to kill them but Visser has other, more lucrative plans of his own. So begins a calculating round of double and triple crosses that build to a bloodcurdling, surprise-filled climax. It's an evil-minded masterpiece from the exciting filmmaking team of Joel and Ethan Coen. In Blood Simple, when someone's gone...it's never for good!

Intolerable Cruelty: It's comic gold as two of Hollywood's most dazzling stars - George Clooney and Academy Award-winner Catherine Zeta-Jones - light up the screen in Intolerable Cruelty, a hilarious romantic comedy about men, women, and everything that can go wrong between them. Sparks fly when brilliant divorce attorney Miles Massey (Clooney) meets his match in the beautiful but ruthless Marylin Rexroth (Zeta-Jones). From Academy Award-winning directors Joel Coen and Ethan Coen (Fargo; O Brother, Where Art Thou?), Intolerable Cruelty also stars multi-talented Billy Bob Thornton and outrageous Cedric The Entertainer.

The Man Who Wasn't There: The Coen Brothers are back with a dark and twisted film noir unlike anything you’ve ever seen. Set in a small 1949 California town, this is the story of a seemingly simple barber, who turns to blackmail and revenge to escape his achingly dull life. But in the tradition of classic noir, nothing goes as planned and nothing is as it seems. And as the barber’s plot unravels, the delicious surprises, stunning revelations and just plain strange occurrences will disturb and delight you long after the film has ended.