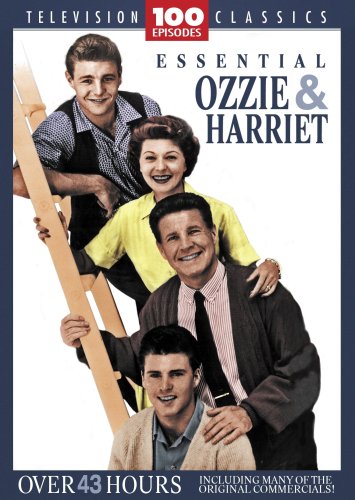 America's most beloved television family returns to your living room in 100 heart-warming episodes. The television series was first broadcast in 1952. Like it's radio predecessor, it revolved around the Nelson family home, sharing the life lessons learned by the boys and their parents and letting us into the rhythm of their lives as they deal with schoolwork, competition, bullies, activities and girlfriends.

Eventually the on-screen David and Ricky graduate from college and became attorneys. When the real David and Ricky wed June Blair and Kristin Harmon respectively, their spouces joined the cast of Ozzie and Harriet on television as well as in real life. Ozzie and Harriet ran for 14 years on American television, remaining on the air until 1966, but lives on as a reminder of kinder and gentler times in perpetual syndication.

Truly a collector's item for fans of all ages! This special collection includes favorite episodes such as Halloween Party, The Pancake Mix and Ricky Nelson singing I'm Walkin'! Featuring many of the original comercials that ran when the shows originally aired. The largest collection of Ozzie and Harriet episodes available in one package, fans of the show will cherish this trip down memory lane!

Episode Titles:
Halloween Party
The Ballet
The Tuba Incident
The Traffic Signal
The Bowling Alley
The Orchid and the Violet
The Pancake Mix
The New Chairs
The Boy's Paper Route
David's 17th Birthday
Suggestion Box
The Initiation
Father and Son Tournament
Be On Time
An Evening with Hamlet
The Bird's Nest
The Odd Bolt
The Pajama Game
Music Appreciation
A Ball of Tin Foil
The Car Mix-Up
A Day in Bed
David Picks Up the Tab
Ozzie's Double
A Hairstyle for Harriet
The Duenna
The Reading Room
The Jet Pilot
The Editor
Ricky the Drummer
Ricky's Big Night
Ozzie's Triple Banana Surprise
Tutti-Frutti Ice Cream
The Christmas Tree Lot
Road Race
The Old Band Pavilion
The Top Gun
The Bachelor
The Magic of Three
The Bridge Group
A Cruise for Harriet
Rick's Riding Lesson
The Motorcycle
Rick's Dinner Guests
Jealous Joe Randolph
The Exploding Book
The Little Black Box
The Sea Captain
David, the Law Clerk
David the Sleuth
Rick Gets Even
David Goofs Off
No News for Harriet
His Brother's Girl
A Sweater for Rick
David's Almost In-Laws
David Hires a Secretary
The Girl in the Emporium
The Girl Who Loses Things
Safe Husbands
Two Small Boys and a Dog
David's Golf Story
The Little House Guest
The Manly Arts
A Question of Suits and Ties
Built-In TV Set
The Dancing Lesson
The Fraternity Rents Out a Room
David Goes Back to Work
The Barking Dog
A Lamp for Dave and June
Making Wally Study
Lonesome Parents
Little Handprints in the Sidewalk
Rick and the Maid of Honor
The Tigers Go To a Dance
Rick Sends a Picture
An Old Friend of June's
Decorating Dave's Office
Women's Club Bazaar
Dave and the Fraternity Lease
Ozzie, Joe and the Fashion Models
A Wife in the Office
A Letter about Harriet
The Ballerina
A Bedtime Story
Kris Plays Cupid
The Petition
Rick's Raise
Breakfast for Harriet
A Painting from the Past
A Rose A Day
Kris and the Queen
The Prowler
A Message from Kris
Flying Down to Lunch
The Ghost Town
Trip Trap
Waiting for Joe
Dave's Other Office
America's most beloved television family returns to your living room in 100 heart-warming episodes. The television series was first broadcast in 1952. Like it's radio predecessor, it revolved around the Nelson family home, sharing the life lessons learned by the boys and their parents and letting us into the rhythm of their lives as they deal with schoolwork, competition, bullies, activiti