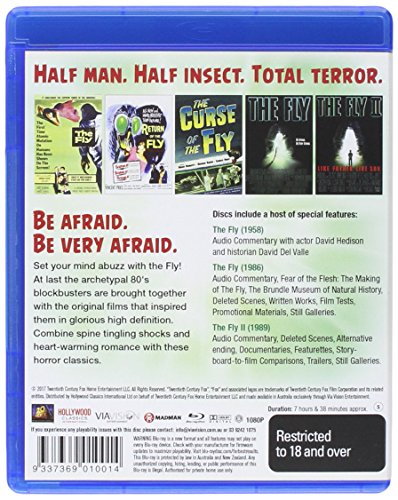 
This fantastic collectible boxset includes The Fly (1958), Return Of The Fly (1959), Curse Of The Fly (1965), The Fly - 20th Anniversary Special Edition (1986) and The Fly II - Special Edition (1989). Pushing the boundaries of horror from the outset, The Fly franchise successfully combined spine tingling shocks with heart warming romance and produced some of the most frightening yet memorable films of all time. Presented in a limited edition boxset this Blu-ray collection finally brings together the classic 80's blockbusters with the original films that inspired them in glorious High Definition.

Fear of the Flesh: The Making of The Fly" - documentary:

The Brundle Museum of Natural History"

2 Extended Scenes (you can use the optional "red box" around the parts that were excised):

The Fly Papers: The Buzz on Hollywood's Scariest Insect" -documentary (of all "The Fly"-films - 60 min)

"Transformations: Looking Back at The Fly II" -featurette