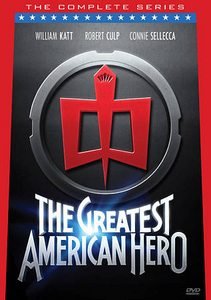 THE GREATEST AMERICAN HERO (1981-3) soared into viewers' homes in March 1981 as the brainchild of prime-time guru Stephen J. Cannell. It began as a simple superhero parody: William Katt (Pippin!) starred as Ralph Hinkley, a sweet-natured high school teacher in Los Angeles, suddenly visited by extraterrestrial beings amid a desert field trip. The aliens gave Ralph a red flying suit, which endowed him with the ability to fly, become invisible, see through walls, and perform a number of other incredible feats. Unfortunately (herein lay the comedy), Ralph lost the suit's instruction booklet not long after the initial visitation, which led to a series of outrageous misadventures in mid-air - with the character plummeting into walls, falling into bushes, and generally flailing about helplessly. A friend of Ralph's, the FBI agent Bill Maxwell (Robert Culp) persuaded him to use the suit to fight crime; standing in the wings and offering her support was Ralph's gorgeous girlfriend, attorney Pam Davidson (Connie Sellecca). The series (as indicated) suffered from several now-notorious problems including an alleged lawsuit threat and a temporary overdub to work around an embarrassing issue related to the Ralph character's last name, but still racked up a very large and loyal cult following for three seasons. This package includes all 43 original episodes plus bonus interviews with Cannell.
Tweet