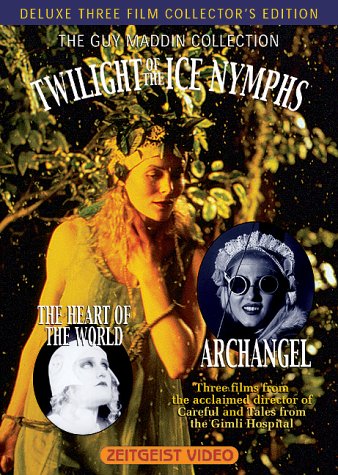 Three phantasmagoric films on one DVD by the Canadian cult master! TWILIGHT OF THE ICE NYMPHS is the most elaborate and surreal fantasia from the master of all things libidinal. Starring Shelley Duvall, Frank Gorshin, and Alice Krige (STAR TREK's Borg Queen), this tale of lusty delirium and unrequited love is set in the mystical land of Mandragora, a supremely sensual dream world which pulses with ethereal, vibrating colors and bizarre flourishes of art direction. ARCHANGEL is set in the Northernmost tip of old Imperial Russia in the winter of 1919. The Great War has been over for three months, but no one has remembered to tell those who remain in the town of Archangel. A weird and wild melodrama of obsessive love with stunning black-and-white cinematography and memorably stylized set design. Commissioned for the 25th Anniversary of the Toronto International Film Festival, Maddin’s acclaimed, award-winning short THE HEART OF THE WORLD is a brilliant, breathless parody of silent Soviet propaganda films.
Tweet