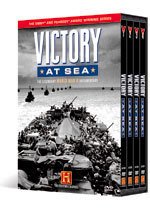 The History Channel : Victory At Sea - The Legendary World War II Documentary : 50th Anniversary Special Edition Release : Digitally Restored -Arguably the most influential documentary in television history, VICTORY AT SEA, in the words of Harper's Weekly, "created a new art form." The 26 half-hour episodes were culled from over 13,000 hours of footage shot by the U.S., British, German and Japanese navies during World War II. Narrated by Leonard Graves and set to a score by Richard Rodgers, the program offered a remarkable look at the realities of naval warfare and the extraordinary challenges faced by the Allies. Now, the complete, landmark series is available on DVD for the first time, digitally restored and remastered for this 50th anniversary release. From U-boat "Wolfpacks" to the epic battles at Iwo Jima and Okinawa, every major naval engagement of World War II is captured in some of the most riveting combat footage ever shot.
Tweet