The Koker Trilogy (Where Is the Friend’s House?/And Life Goes On/Through the Olive Trees) (The Criterion Collection) [Blu-ray] 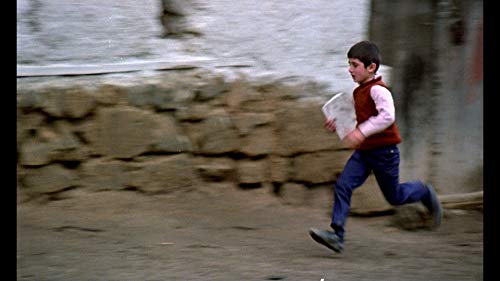 Abbas Kiarostami first came to international attention for this wondrous, slyly self-referential series of films set in the rural northern-Iranian town of Koker. Poised delicately between fiction and documentary, comedy and tragedy, the lyrical fables in The Koker Trilogy exemplify both the gentle humanism and playful sleight of hand that define the director’s sensibility. With each successive film, Kiarostami takes us deeper into the behind-the-scenes “reality” of the film that preceded it, heightening our understanding of the complex network of human relationships that sustain both a movie set and a village. The result is a gradual outward zoom that reveals the cosmic majesty and mystery of ordinary life. THREE-BLU-RAY SPECIAL EDITION FEATURES • New 2K digital restorations of all three films, with uncompressed monaural soundtracks • New audio commentary on And Life Goes On featuring Mehrnaz Saeed-Vafa and Jonathan Rosenbaum, coauthors of Abbas Kiarostami • Abbas Kiarostami: Truths and Dreams, a 1994 documentary • New interview with Abbas Kiarostami’s son Ahmad Kiarostami • New conversation between Iranian-film scholar Jamsheed Akrami and film critic Godfrey Cheshire • Conversation from 2015 between Kiarostami and film-festival programmer Peter Scarlet • New English subtitle translations • More! • PLUS: An essay by critic Godfrey Cheshire Where Is the Friend’s House? The first film in Abbas Kiarostami’s sublime, interlacing Koker Trilogy takes a simple premise—a boy searches for the home of his classmate, whose school notebook he has accidentally taken—and transforms it into a miraculous, child’s-eye adventure of the everyday. As our young hero zigzags determinedly across two towns, aided (and sometimes misdirected) by those he encounters, his quest becomes both a revealing portrait of rural Iranian society in all its richness and complexity and a touching parable about the meaning of personal responsibility. Sensitive and profound, Where Is the Friend’s House? is shot through with all the beauty, tension, and wonder a single day can contain. And Life Goes On In the aftermath of a 1990 earthquake that left at least thirty thousand dead, Abbas Kiarostami returned to Koker, where his camera surveys not only devastation but also the teeming life in its wake. Blending fiction and reality into a playful, poignant road movie, And Life Goes On follows a film director who, along with his son, makes the trek to the region in hopes of finding out if the young star of Where Is the Friend’s House? is among the survivors, and discovers a resilient community pressing on in the face of tragedy. Finding beauty in the bleakest of circumstances, Kiarostami crafts a quietly majestic ode to the best of the human spirit. Through the Olive Trees Abbas Kiarostami takes meta-narrative gamesmanship to masterful new heights in the final installment of The Koker Trilogy. Unfolding “behind the scenes” of And Life Goes On, this film traces the complications that arise when the romantic misfortune of one of the actors—a young man who pines for the woman cast as his wife, even though, in real life, she will have nothing to do with him—creates turmoil on set and leaves the hapless director caught in the middle. An ineffably lovely, gentle human comedy steeped in the folkways of Iranian village life, Through the Olive Trees peels away layer after layer of artifice as it investigates the elusive, alchemical relationship between cinema and reality.
Shrink-wrapped