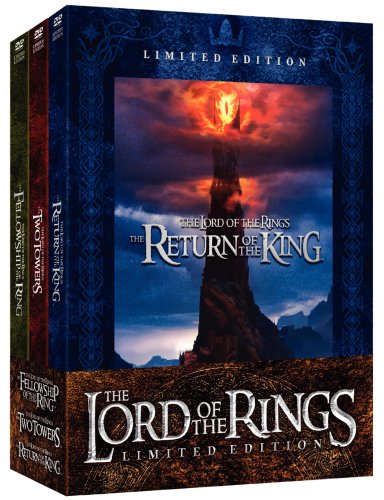 Disc 1: For the first time, the Theatrical and Extended versions of each film are on one disc! This 2-sided DVD puts both versions of the epic film on one convenient, portable disc. You can choose which version you'd like to see from the main DVD menu.

Disc 2: Each film has a new behind-the-scenes documentary created by filmmaker Costa Botes. Mr. Botes was personally selected by Peter Jackson to capture every moment during production of the trilogy. He had unprecedented access to the cast and crew during staff meetings and down time, training and rehearsals, laughter and arguments.

Mr. Botes created 3 feature-length documentaries using a raw editing style that gives the viewer a complete fly-on-the-wall experience. Here are the types of stories and moments you can expect to find throughout the 3 documentaries (one per film in the trilogy):

FAQs
Still have questions about this release? Here are some Frequently Asked Questions from fans.

When Is The Lord of the Rings Going to Be Released in High Definition (Either HD-DVD or Blu-ray)?
The high definition formats that have recently launched offer exceptional picture and sound quality in addition to new interactive bonus feature capabilities. New Line Home Entertainment is committed to the high definition format and is very excited about the idea of releasing the Trilogy in the format. However, New Line is also committed to maximizing the capabilities of the technology to deliver a cutting edge high definition experience. This will take more time as well as the participation of the filmmakers to achieve. It is currently not scheduled for release until, at the earliest, 2008.

I already own both versions of each film. Why doesn’t New Line just release the documentaries?
Having unprecedented access to the cast and crew during film production inevitably means that there are some restrictions. In this case, releasing these documentaries unaccompanied by the film would be nearly impossible because of agreements that are in place with the cast and crew. We wanted to make the documentaries available while also giving the fans something they don’t have, which is why we included both versions of the film on one disc.

How are these documentaries different from the ones on the special extended DVD editions?
The in-depth documentaries on the Special Extended DVD Editions were custom made for the DVDs using new interviews from the cast and crew incorporated with the behind-the-scenes footage to tell the stories. The Costa Botes documentaries use only creatively edited behind-the-scenes footage to give you, the viewer, a feeling of "being there" in the moment while things are happening. There is no narrative to tell the story, but instead a constantly running series of clips that show the raw moments that make up the day-to-day progress on a large film production.

Do I have to flip the disc over to watch the whole movie?
Yes. Due to space capacities of the DVD format and the use of seamless branching, both the theatrical and extended versions of the film are split in the middle of disc 1, so part 1 of the film is on one side of the disc and the conclusion is on the other.