The Shield – The Complete Series [Blu-ray] 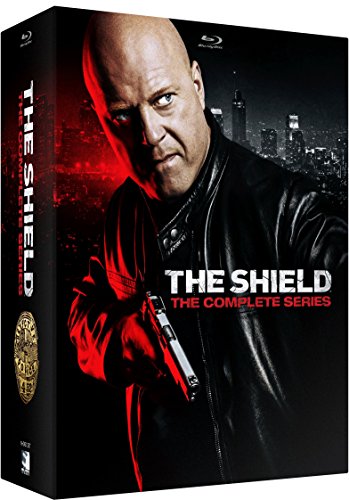 
All 88 episodes from seven groundbreaking seasons of the Emmy®-winning series available for the first time ever in stunning widescreen High Definition!
This definitive collector's edition set features full 4k HD restorations of each episode, along with dozens of hours of special features including deleted scenes, commentaries from the cast and crew, featurettes and so much more!
Created by Shawn Ryan (TV's S.W.A.T., Timeless, The Unit), Michael Chiklis (TV's Gotham, Fantastic 4), Catherine Dent (TV's The Agents of S.H.I.E.L.D.), Walton Goggins (The Hateful Eight), Jay Karnes (TV's The Crossing), Benito Martinez (TV's How to Get Away With Murder, American Made), CCH Pounder (Avatar) and Kenny Johnson (TV's S.W.A.T.)
INCLUDES ALL-NEW SPECIAL FEATURES AVAILABLE ONLY IN THIS BLU-RAY SET:
"The Shield Reunion" - cast & crew reunion special to reminisce and reflect on being a part of this landmark series. "The Shield: A Retrospective" - a look back at the lasting impact the series has had on TV and how its themes are still relevant today. "The Shield Writers Room" Reunion from the ATX Festival Panel.
Beautifully packaged in a high-value DigiBook with hundreds of production stills and behind-the-scenes photos!
Features all-new liner notes written by creator Shawn Ryan giving an intimate perspective of this series!
Shrink-wrapped
Tweet