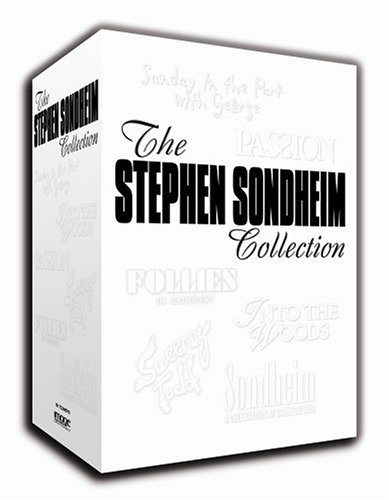 Celebrate the brilliance of Stephen Sondheim, one of musical theater's most acclaimed and popular talents, with this special collection.

FOLLIES IN CONCERT: The incomparable Stephen Sondheim brought his sensational Follies to the stage in 1971 where it was hailed as "monumental theater" by The New York Times. Fourteen years later, the magic was recreated by an unparalleled gathering of stage and screen luminaries performing with the New York Philharmonic at Lincoln Center for a wildly enthusiastic audience. Includes the memorable songs "Losing My Mind" and "I'm Still Here" and an all-star cast.

INTO THE WOODS: A baker and his wife journey into the woods in search of a cow, a red cape, a pair of golden slippers and some magic beans to lift a curse that has kept them childless. Tony Award winners Bernadette Peters, Joanna Gleason and the rest of the original Broadway cast weave their magic spell over you in Stephen Sondheim's masterpiece, a seamless fusion of fairy tale characters and what happens after "happily ever after."

PASSION: An unforgettable chronicle of the redemptive power of love, this is a mesmerizing musical rhapsody in which a soldier torn between two women discovers the true meaning of love. A haunting study of obsessive love, this striking production offers a visual and musical feast that will linger in your heart and soul forever! Winner of 4 Tony Awards.

SUNDAY IN THE PARK WITH GEORGE: Sondheim and James Lapine construct a dazzling story from one of the world's most famous painting, Georges Seurat's "A Sunday Afternoon on the Island of La Grand Jatte," creating a moving exploration of art, love and commitment. Winner of the 1985 Pulitzer Prize for Drama.