The Story of G.I. Joe 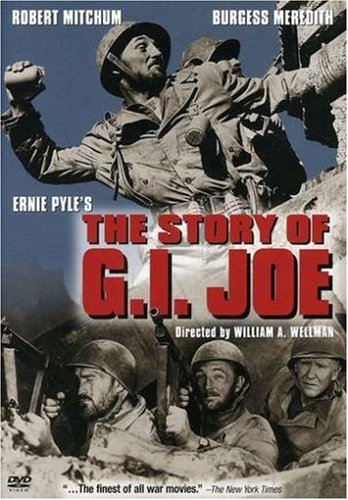 The mightiest action drama ever filmed! Robert Mitchum (Cape Fear) and Burgess Meredith (Of Mice and Men) star in this gripping World War II drama based on the newspaper columns of Pulitizer Prize-winning war correspondent Ernie Pyle. Directed by legendary filmmaker William Wellman, "The Story of G.I. Joe" depicts Ernie Pyle's (Meredith) experiences with the men of Company C of the 18th Infantry and their role in the invasion of Italy. Pyle joins Captain Bill Walker (Mitchum) and his men in the desert of North Africa and follows these gallant soldiers as they fight their way from the beaches of Sicily to the hills of southern Italy. Few films have so honestly portrayed the harrowing existence of the infantry soldier in World War II--an unsentimental, often brutal, but always human story of the mud, blood and death that surround the infantryman in combat. Mitchum's performance made him a star and earned him an Oscar nomination as Best Supporting Actor. Critics and film historians agree--this is simply one of the best films ever made about World War II.
The Story Of G.I. Joe - DVD Brand New
Tweet