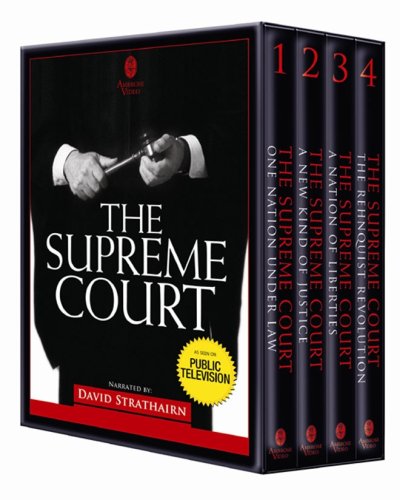 It's known as the court of last resort - the Supreme Court - where nine judges appointed for life make monumental decisions that govern our everyday lives, from the contents of the nation's daily newspapers to what we can do in the privacy of our own homes. With immense power and considerable mystery, the court of final appeal has helped author the history of America. But even though it is one of the pillars of American democracy - the ultimate interpreter of the Constitution - no television series has ever fully profiled the inner workings of the court. Until now. By fusing history with biography, THE SUPREME COURT humanizes the enigmatic black-robed figures, revealing their temperaments, passions, deeply held personal beliefs, and life stories. The series also explores the dramatic stories of the people whose cases have come before the court, as well as the often controversial rulings that impact all Americans.

The series charts the court's unique evolution, using archival footage and innovative graphic techniques to help audiences grasp complex legal concepts. Interviews with some of the greatest legal minds in the country as well as exclusive access to the court help personalize the justices while providing context to key decisions and hot-button issues of the day.

Programs in this series:
One Nation Under Law
A New Kind of Justice
A Nation of Liberties
The Renhnquist Revolution