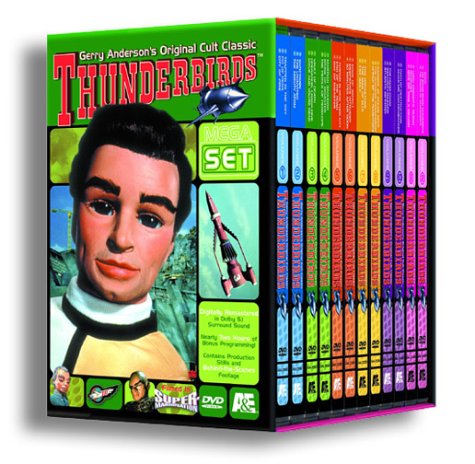 Filmed in VIDECOLOR explosions drum roll music builds to a climax and SUPERMARIONATION The opening sequence of Thunderbirds is itself a master class in Gerry Andersons marionette hyperbole: who else would dare to make a virtue out of the fact that a the show is in color and b its got puppets in it? But everything about this series really is epic: Thunderbirds is action on the grandest scale predating such high-concept Hollywood vehicles as Armageddon by 30 years and more the acting is better too and fetishizing gadgets in a way that even the most excessive Bond movies could never hope to rival. Unsurprisingly the visual effects are by Derek Meddings whose later contributions to Bond movies like The Spy Who Loved Me and Moonraker echo his pioneering model work here.As for the characters the clean-cut Tracey boys take second place in the audiences affections to their cool machines--the real stars of the show--while comic relief is to be found in the charming company of Lady Penelope and her pink Rolls license plate FAB1 driven by lugubrious chauffeur Parker whose Yes milady catchphrase resonated around school playgrounds for decades. Spare a thought for poor old John Tracey stuck up in space on Thunderbird 5 with only the radio for company. The puppet stunt work is breathtakingly audacious and every weeks death-defying escapade is nail-bitingly choreographed in the very best tradition of disaster movies. First shown in 1964 and now digitally remastered Thunderbirds is childrens TV that still looks and sounds like big-budget Hollywood.The Thunderbirds Mega Set contains 32 complete uncut and digitally remastered episodes on 12 DVDs. Bonus features include production stills photo galleries two original 1965 The Making of Thunderbirds featurettes the History of Thunderbirds character biographies and a Gerry Anderson biography filmography. --Mark Walker
Tweet