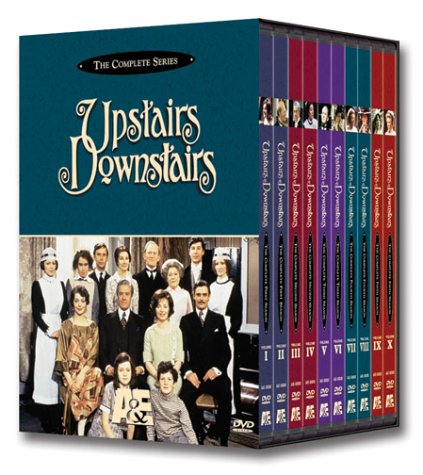 Upstairs, members of the aristocratic Bellamy family lead their privileged lives, seemingly oblivious to the goings-on downstairs, where the serving staff steers the household on an even course. Every complex character in both these worlds has a tale to tell. Now devotees (of which there are millions) of the landmark BBC series can revisit 165 Eaton Place and revel again in an extraordinary domestic drama. Thirty years after this award-winning phenomenon first aired, all 68 episodes have been digitally remastered as a DVD set, which includes the retrospective Upstairs, Downstairs Remembered: The 25th Anniversary Special. Over 57 hours on 20 DVDs. Simon Says: The postmodern mind posits that there's nothing new under the sun; we just shuffle it around. Witness a 1999 episode of Cosby. Coz has fallen asleep during an I-Spy television marathon and Robert Culp, still in his I-Spy character of Kelly Robinson, appears to him in a dream. The episode is titled "My Spy."
Upstairs Downstairs The Complete Series - DVD Brand New
Tweet